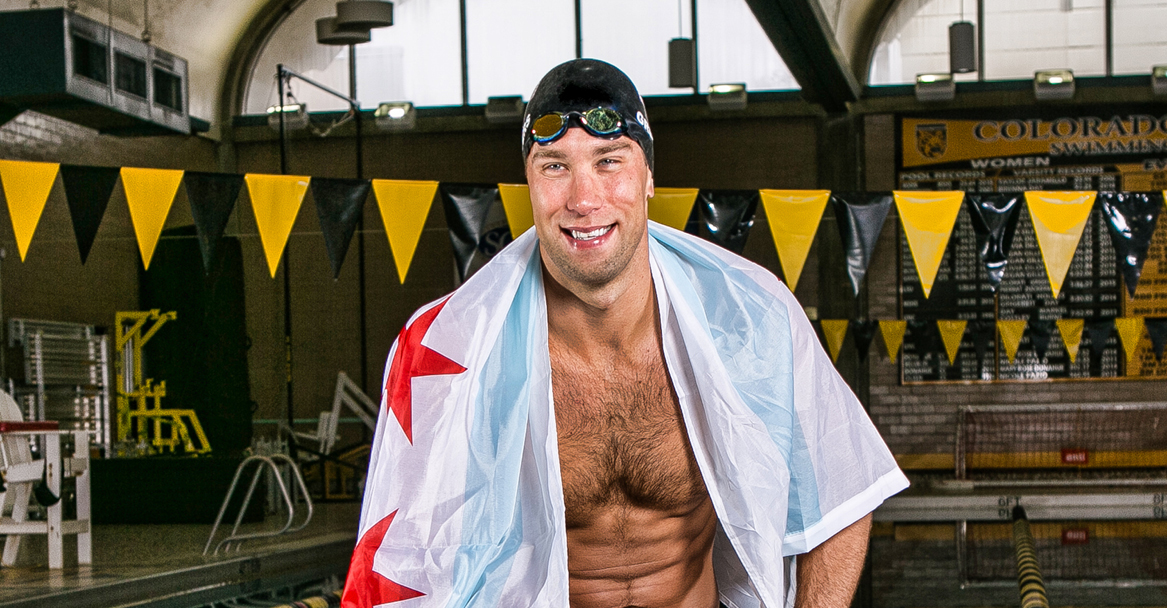 How does Matt Grevers bring it home? By proudly representing Chicago as a six-time Olympic medalist and world champion swimmer. It’s taken a six-day-a-week training schedule, a 130-gram-a-day protein diet, and a lot of determination, but Matt is ready to go all the way. And, he’s got the support of his family, friends and the Chicago community. We’re proud to call him a member of Chicago’s Team!

Eating habits while training: Matt does his best to eat healthy as often as he can. He eats lots of nuts, beans, and lean proteins like chicken, turkey, and fish. He also supplements with fruit smoothies with protein powder if he feels like he didn’t hit his 130-gram protein goal.

Athletic pre-competition ritual: Matt does the same series of stretches behind the blocks at every meet. His favorite stretch, the Flamingo Stretch, involves pulling the foot up and leaning forward to get a thorough elongation of each quadriceps. When he puts his goggles on, he imagines a different filter where he visualizes his race through “perfect vision” for a quick refresher on the race’s technicalities.

Chicago roots: Matt was born in Lake Forest, Illinois, but then lived in Gurnee until returning to Lake Forest at 10 years old. He went to Lake Forest High School and then went on to college at Northwestern.

Favorite thing about Chicago: Matt loves how happy everyone is in the summer, like we need to appreciate the beautiful weather while we have it (because we do!). Matt also says he loves that Chicago is such a supportive sports city. We love to play and we love to cheer.

Plan a day touring Chicago: Matt says if he were taking a friend on a tour of Chicago, they’d start at the top of Willis Tower to see the entire city at once and he’d point out the most important landmarks. He’d then take the person on the Architectural Boat Tour to get an up close feel of the city. He’d then take his friend through the Art Institute and to Millennium Park and they’d finish the day at Wrigley Field for a Cubs game.

Related Topics
January 16, 2020
How to brace yourself for a Polar Vortex 2.0
December 06, 2019
Spending the holiday season in Chicago? Here’s what to do
March 03, 2020
7 of the smartest pieces of advice about saving money from early retirees
by Hillary Hoffower