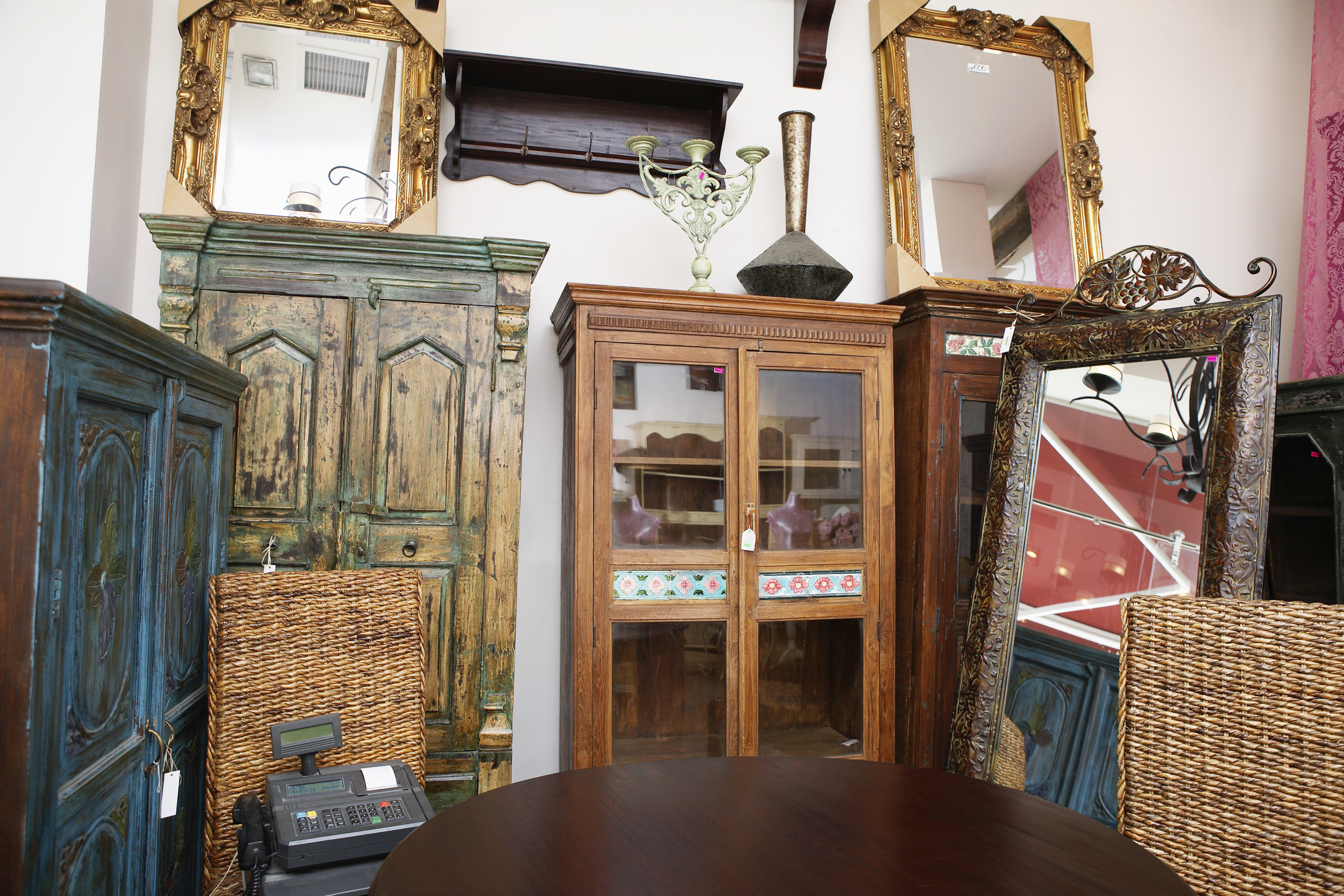 An ode to old furniture

An ode to old furniture

When I was about 10, my parents bought a brand new glass table for our living room. Even at 10, when my idea of cool was Chicago Bulls wallpaper, I could see that this was a cool table. Plus, my parents let it be known that by our standards, it was expensive.

I was told to be very careful around this table, which is why I briefly considered fleeing Southern California and going to live with relatives in Oklahoma when I accidentally scratched the glass. After my parents discovered the damage, they reacted like I'd been caught simultaneously selling drugs and flunking all of my classes. The punishment was swift and unrelenting. I love my parents to death, but in this instance they clearly fell victim to the "my expensive thing I bought is the best thing ever and should be treated like the Mona Lisa" syndrome.

By this age, of course, I'd already stained or damaged multiple other pieces of furniture. But my parents hadn't batted an eyelash, because those items were either quite old or hand-me-downs – stuff they hadn't spent much, if any, money on.

One of the best reasons to have old furniture is that it's less stressful than owning brand new stuff. It's not the end of the world if you scuff the arm of a 10-year-old sofa, or if you get a small scratch on a 30-year-old wood table that's been passed around your family for years.

If you have young kids or a pet, it makes even more sense to rein in your spending on furnishings. You already have enough to worry about — worrying whether your baby or furry friend accidentally stains a sofa cushion is only going to add to your stress. Get stuff that's meant to be used.

This is the obvious reason, but it still must be mentioned. As long as you're not buying it from the estate sales of million-dollar homes, used furniture can be found at a steep discount, and often for free. New furniture, meanwhile, is going to burn a large, loveseat-sized hole in your wallet.

The average American spends about $1,800 per year on "household furnishings," according to 2015 research from the Bureau of Labor Statistics. If you consider that the average person spends 40 years in the workforce, that's $72,000 spent on furnishing your house over the course of a working life.

Using data from the websites of IKEA, Target, and Pottery Barn, I calculated the average costs of furnishing an apartment in 2016 using mid-level items from each store: a sofa, chair, side table, coffee table, lamp, dining table and chairs, bed, dresser, nightstand, and a desk lamp.

Luckily, there are many ways to hunt for awesome, cheap, used furniture.

Where to look for used furniture

If you live in an area with an active Craigslist community, finding free, gently used furniture is a breeze. A quick search of my area for free furniture yielded a treasure trove. Clean-looking sofas, beds, tables, chairs, dressers and TV stands populated my screen within seconds. I could even get a used trampoline. Unfortunately, I wasn't able to convince my fiancée that it would be fun cramming one into our NYC apartment. We settled on a boring old free bed instead.

If you aren't a Craigslist fan, you can check out Freecycle.org as well. Freecycle is a community where people actively try to find new homes for their used furniture and other goods. There's never a price attached. All of my interactions through this site have led me to believe the users are good, honest people who want to do their part to keep perfectly usable items out of landfills. It's definitely worth checking out.

Another option is to see if there's a building reuse center in your area, or if your local chapter of Habitat for Humanity operates a ReStore — these shops accept and resell donated building materials and home furnishings. You can also find used furniture at many larger thrift stores, neighborhood yard sales, and Facebook yard sale groups in your area as well.

Finally, if you live near a college, you can always take advantage of student move-out days, usually around the end of classes in late spring or early summer, and student move-in days, when classes resume in late summer or fall (or when apartment leases renew on September 1).

Student moving days should be a national holiday for working adults who live near a college campus. When students move out of their dorms and apartments, a lot of them tend to leave their furniture and other unwanted items on the curb for lack of space in their vehicle or their new apartment.

If you live near a school with high tuition costs (which is pretty much every school these days), you're in luck. On one or two weekends a year, the streets will be lined with more Swedish furniture per square foot than an IKEA. Shelves, beds, chairs, dressers, couches, and lamps will all be there for the taking. They will all have been owned for at least a year, so the off-gassing process should be well underway.

But when the streets of Boston's biggest student neighborhood are lined with U-Hauls and apartment cast-offs — has been less enticing in recent years because of a tiny, nightmare-inducing scourge…

You can't start a conversation about the awesome futon you pulled in from the side of the road without a skeptical friend asking, "But… what about bedbugs?" And it's a fair question. Bedbugs have grown to be a bigger and bigger problem since the 1950s, and – ask anyone who's had them – getting rid of them is a time-consuming, costly, and often emotional nightmare. The problem boiled over into the national consciousness about five years ago, when there were many reported cases making the news.

Thankfully, the fear has died down, and research has shown the phobia was overblown to begin with. Even at the height of the bedbug mania, you were still as likely to get bedbugs from staying in a hotel as from used furniture, and they don't carry disease.

Still, when buying something used, do your due diligence in searching for bugs:

I have moved four times in the last 18 months. I changed states with every move. Yes, that's crazy, but no, that's not where I'm going with this – the point is that it's a pain to sell furniture.

Unless your items are very high-end, your ability to sell your old furniture comes down to hoping that someone with your exact same sensibilities will be cruising Craigslist at the exact same time. The IKEA couch you thought was worth at least $150 might languish online for weeks, even though you paid $250 for it just six months ago.

Alternatively, if you picked up almost all of your furniture for free – who cares? You have nothing to worry about. If you have a truck or van, you can easily donate it to a Goodwill or other thrift store so that it can find a happy new home. You can also leave it by your trash and order a bulky item pick up. In New York, my current location, you can call for a bulk recycling pick-up and recycle your old furniture.

Older stuff typically lasts longer because quality materials were used — stronger wood and higher quality fabrics. Whereas today, thin wood and synthetic materials are used, increasing the likelihood that the furniture tears, sags, or color fades sooner. Medium density fiberboard, or MDF, has become increasingly popular as a wood replacement over the last few decades. It is notorious for being used in low-quality items.

Along with mass production comes the use of cheaper materials. High-quality furniture that lasts a long time is expensive, so most people go for the cheap "flat-pack" couches from place like IKEA and Target. While they're a cheap option to get you through in a pinch, they're not built to last.

The glues, solvents, and chemicals used in making furniture produce VOCs, or volatile organic compounds. These compounds escape from the furniture via a process called off-gassing. Such compounds – most notoriously formaldehyde, one of the worst known carcinogens – can be inhaled, causing a medley of health problems.

Thankfully, through off-gassing, the levels of VOCs produced by furniture go down over time. A piece of very old furniture will have had a long time to get these compounds out of its system. Another feather in the cap for buying used.

Don't beat yourself up if you've spent quite a bit of money on furnishing your home. Furniture stores do over $100 billion in sales per year, and they know all the slick marketing techniques to keep you wanting that next great kitchen table set. But, once you realize that used furniture can be cheaper, sturdier, and even healthier, you can take small steps towards becoming a savvier consumer.

The post An Ode to Old Furniture appeared first on The Simple Dollar.

This article was written by Drew Housman from The Simple Dollar and was legally licensed through the NewsCred publisher network.