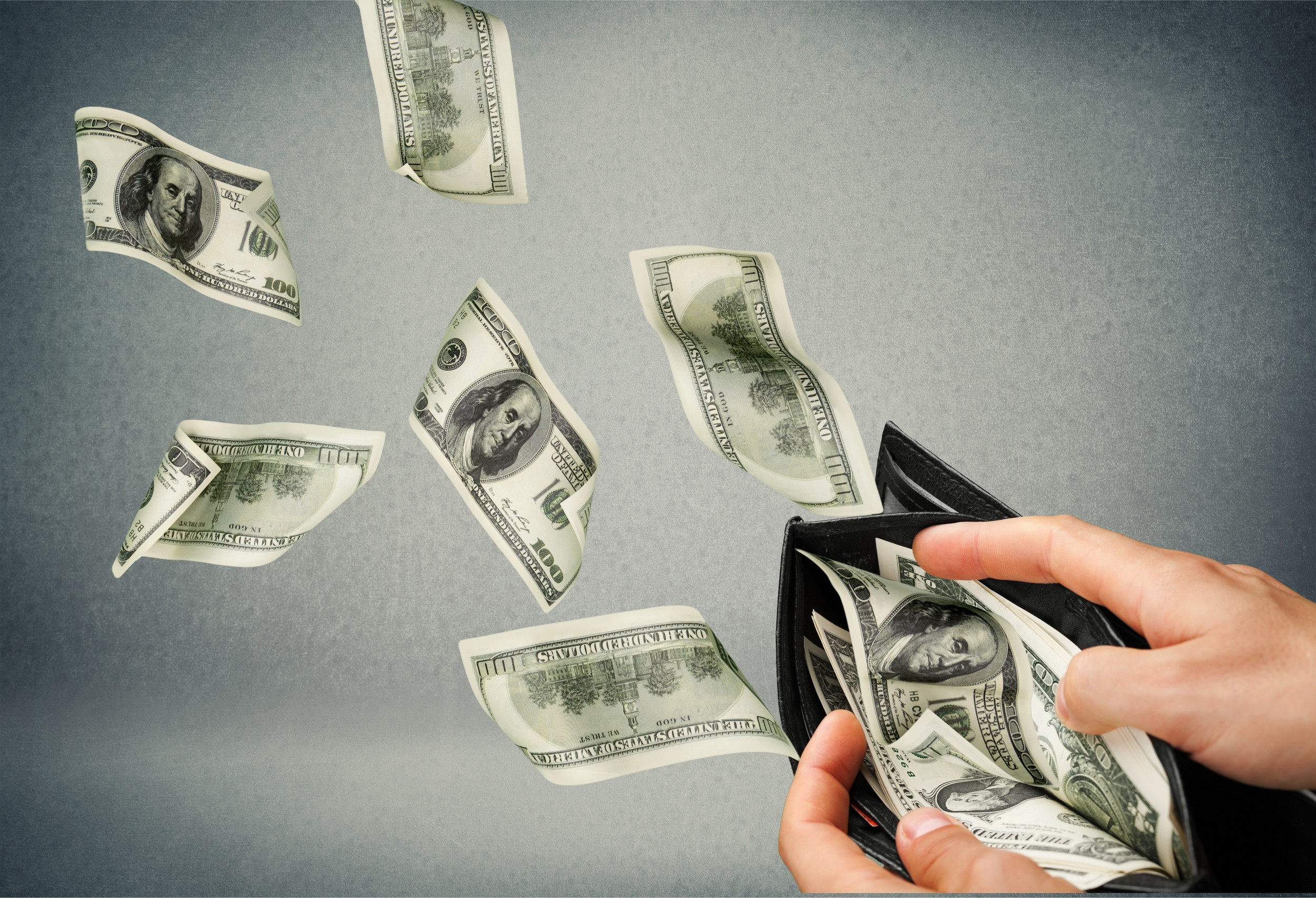 While the reasons might vary, the truth is Americans seem to have a penchant for debt and overspending. By and large, we're spending all we earn and then some, charging what we can't afford on our credit cards, and borrowing more than we need for homes, cars, and even furniture.

A recent CareerBuilder survey of thousands of U.S. workers and employers across industries revealed that 78% of households are living paycheck-to-paycheck.

But is it all our fault? Heck, no. Obviously, some of our issues aren't personal but economic in nature; stagnant wages and a rising cost of living have made it harder to save, for example. And while the official unemployment rate was a slim 4.1% in December, not everyone is in a job that pays enough to cover their bills.

Regardless, part of the American struggle – at least for some of us – can be traced to our own poor financial habits. For every person drowning in medical debt or laid off from their job, there are several more who overspend just to keep up with the Joneses' or because they don't have a good grasp on what they can really afford.

If you're someone who lives paycheck to paycheck despite earning a decent income – or you keep finding yourself in the overspending-by-choice category – you're probably wondering what to do next. How do you start living on less when you're already struggling to make it to payday? And how do you change bad habits you've had for decades?

The reality is, putting a halt to overspending isn't easy – and you may even need professional help. In the meantime, it never hurts to try to replace bad spending habits with good ones – or at least try to prevent overspending before it happens.

But, what is the best way to get started when you don't know any other way? We reached out to financial planners and money bloggers to see how they curtailed their behavior over time. Here's what they said:

One common culprit of overspending is plain ol' convenience. The fact that credit cards are so easy to use is one of the reasons people get into credit card debt, after all. You just swipe your card and worry about it later, and you may not even get a bill in the mail for weeks.

If you want to avoid overspending, one of the best things you can do is nip problem areas like this in the bud. If you find yourself racking up credit card debt because it's overly convenient, for example, putting your cards away in a drawer is a smart way to limit their use.

Unfortunately, Fearon quickly found out that Amazon made shopping a little too easy. And before she knew it, she was spending way more than her budget on anything she wanted.

To fix this situation, Fearon says she and her husband agreed on a "No Amazon Month" where neither one of them could purchase anything online. She stuck post-it notes on their computers and even took her debit card off her Amazon profile.

It was tougher than she thought it would be, but the blogger says she eventually overcame her Amazon addiction.

The bottom line: Figure out what your problem areas are and find ways to limit your exposure. That could mean hiding your credit cards, staying out of tempting stores, or simply removing saved cards from your online shopping profiles.

Tom Drake, Canadian blogger and the founder of MapleMoney, says he used to have a weakness for impulse purchases. There's always a new gadget to buy or a great sale going on, he says. If you're not actively limiting yourself, it's far too easy to shop until you drop – or until you've spent all your money and then some.

To limit his impulse shopping, Drake says he set up a new rule where he had to wait 24 hours before he purchased anything over $100.

"Basically, if I saw something in a flyer or while browsing online, I would wait until the next day to decide if I still wanted to buy it," he says.

Drake says this strategy works well for him because, once you get past the initial rush of getting excited about a possible purchase, your enthusiasm usually wanes. Waiting 24 hours also gives you time to research the item, compare prices, and review your budget and savings goals to see if you can truly afford it.

While some people can use credit cards without racking up debt or spending too much, not everyone has the discipline, the desire, or the time to keep track of their purchases and their credit card balances. One way to avoid racking up debt is to switch to paying cash for everything – or at least all your purchases that fall within specific categories.

Budgeting blogger Mitchell Walker of The Pouch Plan Budget says he and his partner started controlling their spending by pre-funding categories they previously overspent in with cash. For his family, these categories included groceries, dining out, entertainment, and gifts.

From there, they had to learn to stretch the cash they had for each category until the end of the month.

"If we were tempted to spend more than we had budgeted, we had to decide which category was going to take the hit for the overspending," he says.

This strategy not only made them think about all their purchases, but it also made them stick with their monthly budget for the most part.

The bottom line: It's much harder to overspend cash than it is to lose track with credit or even debit. For that reason, switching to cash-only or even the envelope budgeting method is a smart way to get yourself back on track.

#4: Look for ways to avoid temptation.

Sometimes our lifestyles work against our financial goals. Either we work in a job that causes us to spend money, we live a little too close to our favorite store or the mall, or we constantly find ourselves in situations where people around us urge us to overspend.

Either way, seeking out ways to limit temptation can be a key to success. And sometimes the change we really need is drastic.

Michelle Schroeder-Gardner, the blogger behind Making Sense of Cents, says her past life working in clothing retail became a financial burden over time. Because she worked in a clothing store and received a big discount as an employee, she felt compelled to shop all the time.

Eventually, she realized she had a spending problem that would only end in disaster. "I was spending so much of my money and was hurting in other areas, mainly with paying my bills and an exploding closet that was full of waste," she says.

Eventually, she quit her job to get away from the situation, she says. After that, she avoided the mall and other situations that made her more tempted to spend. These days, the blogger lives full-time in an RV, so there's no room for excess clothing anyway, she says.

If you overspend each month and can't figure out where you go wrong, it might be time to start using a monthly budget. Your budget doesn't have to be overly complicated, nor do you have to use computer software if you don't want to. The main key to budgeting is figuring out how much you earn and writing out how much you plan to spend on bills and discretionary categories like food, entertainment, and savings.

Arizona financial planner Charles C. Scott says that, when he first started budgeting, he started with a simple list of bills, wants, and needs.

He gave the bills and needs categories priority he says, then took some time to figure out which "wants" he wanted to splurge on each month.

Taking the time to budget this way helped Scott realize how unimportant his wants were over time, he says. And while he still splurges occasionally, he feels that writing everything down and truly thinking through each purchase helps him limit impulse shopping and waste.

#6: Set up separate bank accounts for categories where you overspend.

If there are areas of your budget where you always over-do it, setting up a separate account to cover those purchases may help you learn to live within limits. This is what Kate Horrell did when she got tired of overspending at the grocery store, and she says it works rather well.

To keep things under control, Horrell set up a separate bank account for groceries with its own debit cards.

"Each payday, the grocery budget is transferred to the grocery account, and all purchases are made using those debit cards," she says. "It's so much easier to keep track, and there's no way to go over budget."

Another way to get real with your spending is to track every purchase you make. When you track your spending, it's impossible to hide from financial decisions or continue living in denial.

While there are plenty of different ways to track your spending every month, financial advisor David Niggel of Key Wealth Partners says he and his wife started using a Google Doc to track their purchases.

While this took a lot of work and some time to get used to, Niggel says tracking their spending has made a huge difference in their bottom line. With all of their purchases listed in one place, it's been easier for the pair to assess their budget each month to see where they might have gotten off track.

"Every dollar and cent counts and adds up over time," he says. And if you don't take the time to track your purchases, it's far too easy for your dollars and cents to disappear.

#8: Find cheaper ways to get what you want.

Finally, you don't have to cut everything out of your life to get your spending back on track. In some cases, you might just need to find ways to spend less on what you want.

If you love shopping and prefer nicer brands, for example, consider shopping at consignment stores to buy used high-end clothing at a discount. If you love a nice beer or a superb bottle of wine, drink at home instead of heading out to the local bar every weekend. If you're a foodie who loves fine dining, take some time to learn how to cook so you don't have to pay outrageous restaurant prices all the time.

No matter your indulgence, it's possible to find a way to get it for less if you're willing to try.

Deacon Hayes of Well Kept Wallet says one big indulgence he used to splurge on was good coffee. The thing is, he didn't want to drink the good stuff at home; he wanted to go to a nice coffee shop and have someone else brew it for him.

But, we all know how that works – how the infamous "latte factor," coined by money expert David Bach, drains away our expendable income week after week and month after month.

Hayes says he eventually bought a nice coffee maker and quit visiting the coffee shop altogether. And now he gets the same quality coffee each morning without the $5-per-day price tag.

This strategy isn't rocket science, but it can make a big difference in how much you can save each month. You may not be able to avoid spending altogether, but spending less for what you want will leave you better off.

Holly Johnson is an award-winning personal finance writer and the author of Zero Down Your Debt. Johnson shares her obsession with frugality, budgeting, and travel at ClubThrifty.com.

This article was written by Holly Johnson from The Simple Dollar and was legally licensed through the NewsCred publisher network. Please direct all licensing questions to legal@newscred.com.