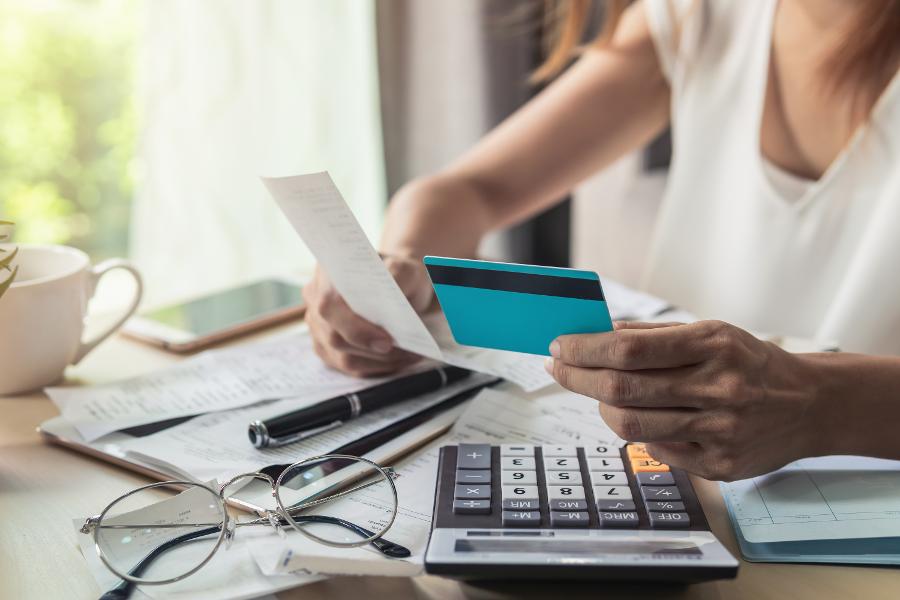 Terry Knight, the 31-year-old founder of Spark Ads Agency in Sunny Isles Beach, Florida, can tell you a thing or two about credit card debt. Some 10 years ago, while still in school, he was laid off from a part-time job and started using his credit card to help pay living expenses. He quickly went over his $3,500 limit—and, like many who find themselves in the heavy waters of consumer debt, couldn’t manage to make the minimum monthly payment each month. He stopped paying the card and the tide of debt eventually swept him out to the sea of debt collections.

This time around, he’s smarter about his payments. He recently racked up a $20,000 balance on an American Express card after using it to fund some of his business ventures and miscellaneous “life” payments that popped up, like birthday parties and weekend getaways. While he was making the minimum payments this time, the card’s 24.99% APR was consistently adding to his balance—making him feel like he wasn’t making any progress at all.

Knight’s experience is instructive. According to Experian, the average credit card balance in Q2 of 2019 was $6,194; the average interest rate in Q3, also according to Experian, was 13.80% (excluding 0% promotional interest rates). Although minimum monthly payments for credit cards can make that balance appear manageable, the consequences of only paying the bare minimum can leave consumers chained to an anchor of debt for years.

How much making only minimum payments will cost

Because of interest, only making minimum payments on a card can cause the balance to balloon—and fast. Before you know it, interest will have you paying hundreds, if not thousands, more than the original balance.

For example, say you have a credit card with the national average balance of $6,194. Assume the card has a 17% interest rate and a minimum payment of 2% of the total balance. If you only make the minimum payment, it will take you over 30 years pay it off in full—and the total payments will amount to $19,427.17, according to this minimum payment calculator. And that’s assuming you never buy one more thing with that card!

How minimum payments can affect your credit score

Making the minimum payment on a card will keep your credit score intact since you aren’t skipping a payment. But keep in mind that only making minimum payments on multiple cards could make it easy for you to continue overspending until you end up with unmanageable debt.

Before Knight obtained a personal loan to consolidate his debt, his TransUnion credit score was 732, according to Credit Karma. His credit card utilization sat at 61%, and his score dropped a few points due to the hard inquiry placed on his report in order to obtain the loan.

After paying off the credit card with the loan, his score jumped to 759. Since personal loans are installment loans, they don’t factor into credit utilization, which measures how much of available revolving credit is being used. As a result, paying off revolving debt with an installment loan drops the credit utilization ratio, resulting in an improved credit score. But be forewarned: a new FICO credit scoring methodology that’s scheduled to come into use by the end of the year will punish you if you take out a personal loan to consolidate credit card debt and then rack up new credit card balances.

While making the minimum payment might seem like the solution for someone who is struggling to pay monthly bills, the interest accumulation makes it a dangerous option. Instead of putting yourself further behind each month, consider these alternatives to paying your card minimum:

Debt payoff methods: For those averse to opening another credit card to pay off debt, there are methods that can help you organize and accelerate your progress toward paying off your balances. The debt snowball method has an individual pay off their smallest balance first while paying the minimum on larger debts.  The idea is that getting rid of one debt in full provides a psychological boost. When that first card is paid off, the amount that was going toward it, is then rolled over to be included in the monthly payment for the next smallest balance, and so on, until all debt is paid in full. Another debt payoff method of the debt avalanche, which is a similar method that attacks the card with the highest interest rate first.

Paying off the balance with a personal loan: If you can’t get approved for a balance transfer card, or have multiple cards carrying balances, debt consolidation could be the next best option. This method uses a personal loan as a tool to pay off all your debt at once and consolidate it into one balance. These often come with an origination fee, so it’s best to shop around for the lowest-cost loan.

After seeing how much he was paying in interest, Knight opted to take out a personal loan. The loan was for $15,700 (including an origination fee) and has a 7.46% interest rate. Now, instead of struggling to work his budget around his credit card payments, he has a fixed monthly payment of $488 that fits nicely into his budget.

One risk of taking out a personal loan to consolidate debt, however, is taking on more debt in the future. Just because your balances are zero after paying off credit cards with a loan doesn’t mean the debt has disappeared—you’ll still be paying for it over time. Keep this in mind, use your credit cards responsibly—-and remember the changes that are being made to the FICO credit score.

This article was written by Kelly Anne Smith from Forbes and was legally licensed through the NewsCred publisher network. Please direct all licensing questions to legal@newscred.com.