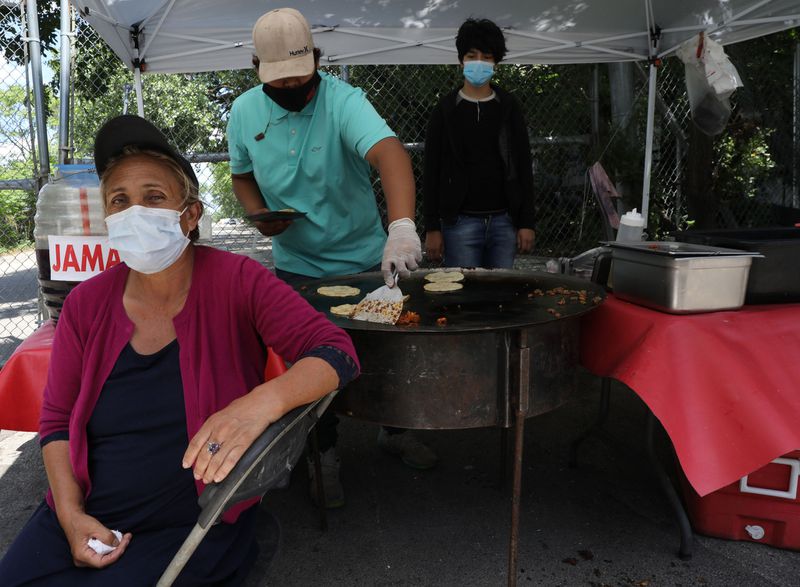 News & Education / Caravans, peace grants and basketball. Finding ways around the pandemic to keep children and others safe in Chicago this summer.

In the blistering heat of a late afternoon sun, the referee called the teens to center court and whistled the start of the 2020 Kids Off the Block basketball season.

The kids in Roseland were eager to finally play.

The tipoff Tuesday afternoon was far from certain. Longtime anti-violence advocate Diane Latiker, who founded the organization in 2003, kept track of federal and city guidelines to see when she could provide a safe space to play. She weighed those risks with concerns over not giving neighborhood kids someplace out of harm’s way.

“We have to,” she concluded. “This is how we have to do this. The kids are clamoring to get out. And then there is the violence. We have to make sure we do something. The summer heats up the violence -- as you can see it is already heated up. We want to snatch as many as we could off the street.”

Many of Chicago’s summer programs to prevent violence have had to readjust because of the pandemic. No block party permits are being issued, and the Chicago Park District has restricted basketball leagues and drop-in activities, as well as the Movies in the Park series.

But the need for activities has rarely been more critical in Chicago, with a troubling spike in the number of children shot and killed over the last two weeks and the traditionally violent Fourth of July weekend ahead. Kids are often caught in the line of fire over holidays as families gather to celebrate.

As Latiker was getting her season started, a coalition called Hit the Hood formed within 24 hours this past week to create an action plan for the Fourth that includes a “peace caravan,” a line of hopefully hundreds of cars winding through neighborhoods into the night Friday.

“We are going to treat it as a protest,” said South Shore activist Will Calloway, one of the organizers of Hit the Hood. “We’re protesting the violence. This is our protest.”

“Peace grants” up to $5,000 are also being offered under the plan through the group My Block, My Hood, My City for people planning events meant to bring people together and reduce violence.

Jahmal Cole, founder of the group, said the money is meant to create a “tiny ripple of hope” on a block with maybe a march or a party or a food drive. “If everybody creates a ripple in their own block, together we can create a wave of change,” Cole said. “We don’t want to be reactive.”

‘This is your safe environment’

Latiker was unsure until about a month ago whether her nonprofit could even put on a basketball season. She stocked up on face masks, hand sanitizer and hand-held thermometers before officially opening.

The games are held on an outside court in a fenced lot. Bright “KOB” murals lined the walls Tuesday night. Music pumped from a speaker as hot dogs and polish sausages grilled.

“Hold on,” Latiker called out as she ran toward a woman and a youngster, both wearing face masks, as they entered the lot. The little girl stood stock still as Latiker pointed a blue and white thermometer gun at her forehead.

Before the first game, ref Antione ”D/Ice” Dobine gathered a group of teens courtside to welcome them to the league.

“Enjoy yourself,” Dobine bellowed. “Play basketball. Have fun. Eat. Go home. Be safe. This is your safe environment here. Anybody do anything to you, ya let me know.”

Only 50 people were allowed inside the area at a time. Face masks were handed out to all who needed one -- and sanitizer was available before anyone ate.

Jessie and Brandon, 13-year-old schoolmates and point guards, sat on a bleacher watching as they waited for their game to start. It had been months since they played.

“I want to score and pass at the same time,” said Jessie, who prefers offense.

Brandon prefers playing defense. “I can stop the other team from scoring,” he said. “And lead my team to win.”

One Sunday afternoon, about 15 men and women from across the city met in a living room and came up with the idea of Hit the Hood as a way of reducing violence over the Fourth of July weekend. One of its main events will be a caravan through violence hot spots Friday night.

He organized a similar parade in June with activist Berto Aguayo, co-founder of Increase the Peace. That caravan, calling for Black and brown unity following the police killing of George Floyd, also came together in just 24 hours and had nearly 500 participants, according to Aguayo. He hopes to see close to 1,000 cars in Friday’s caravan.

Before the parade begins, leaders of the Hit the Hood coalition will host events in their own neighborhoods starting around 5 p.m. At 9 p.m. Friday, those groups will come together at 71st Street and Jeffrey Boulevard in South Shore for an overnight caravan through the South and West sides.

“If people see thousands of cars, advocating peace, promoting peace in our streets, I think that will give people a sense of security and we’ll be kind of patrolling the streets,” Aguayo said. “(For) those people that might always say, ‘Why don’t you protest the violence in your neighborhoods,’ we’ve been doing that for generations, we’ve been protesting the violence in our neighbors.”

On Saturday, Aguayo will host a “peace cookout” in Back of the Yards, passing out grill packs -- with hot dogs, hamburger patties, buns, ketchup and mustard -- for people to take home for their families. “In a lot of ways peace starts at home,” he said. “And if we can give people, ‘Hey, put this on your grill,’ it might keep them at home and chilling.”

Calloway will host a dinner and a movie at a South Shore park.

The Hit the Hood initiative ends Sunday, with organizers hosting events focused on healing. In Back of the Yards, Aguayo will lead a community cleanup, taking care of residential streets that can be ignored by the city and checking in with neighbors.

Aguayo co-founded Increase the Peace three years ago to help develop young leaders and promote peace through community organizing. Like groups across the city, Aguayo has had to adapt to COVID-19.

“I think all of us have had to shift to meeting basic needs while at the same time trying to ensure that we’re saving some lives,” Aguayo said.

Cole, the founder of My Block, My Hood, My City, believes what people really need right now are resources. This weekend, the group will be giving out “peace grants” of up to $5,000.

Within two days of accepting applications, Cole said his group received more than 300 responses. The group has $50,000 available to give away this weekend, but Cole wishes they could give even more.

“I wish I had put a million dollars in the street this weekend,” he said. “I think the way poverty and segregation contribute to gun violence is poorly understood in Chicago.

“Gun violence is a reflection of racial and economic injustice, poor neighborhoods, under-resourced schools, high incarceration, high unemployment,” he added, calling it the “perfect storm for gun violence in Chicago.”

Outdoor neighborhood activities aimed at improving public safety have been a staple of Chicago summers for years. Some are programs that require registration, others are pop-up block parties aimed at drawing a community out to celebrate together with food, music and the ever-present bouncy house.

The gatherings create a space to connect with victims, or maybe engage with young men swept up in the violence and steer them toward a jobs program or other social support -- opportunities that are harder to provide during the pandemic.

The 2017 launch of the Light in the Night program in Chicago provided needed support for community events in some of the city’s most dangerous neighborhoods. But the pandemic has affected how the gatherings can be planned this year, given the need for social distancing.

So this summer the groups are offering food and PPE to residents in need, said Bridget Hatch, a spokeswoman for the organization that administers the program. “They’ve had to pivot but they have done it masterfully,” she said.

The food giveaways were able to feed 30,000 people in just one week, according to Hatch.

Meanwhile, the long-standing Hoops in the Hood program, which teaches both basketball and life skills throughout the summer, has had to scale back the number of kids it serves to make sure everyone is safe. Some 1,500 kids will participate, with more virtual activity and individual skill work in smaller groups. There will not be any contact.

“We are working closely with our partners to be as flexible, nimble and creative as possible within the social distancing guidelines,” said Meghan Harte, the executive director of LISC Chicago, a community development organization that funds the program.

Oscar Contreras, a longtime community organizer in the Back of the Yards, initially struggled to get his programs organized without permits to shut down streets and the limited access to the city’s parks. “I am running three programs right now and I can’t even touch ‘em,” he said last week, sounding exasperated.

Contreras, who runs one of the Hoops in the Hood programs, learned a few days later that the basketball programming would go ahead, just in smaller groups and with a focus on more individual skills.

He is hoping that by summer’s end the city will really be open -- enough to host a large outdoor party for the neighborhood. “I’m old-school,” he explained. “I’ve been doing this for so many years, to engage these kids and really see them, see (if) they might be depressed. Or if they want to talk. And you are there for them.”

This article is written by Annie Sweeney and Sophie Sherry from Chicago Tribune and was legally licensed via the Tribune Content Agency through the NewsCred publisher network. Please direct all licensing questions to legal@newscred.com.